Cuteness with Hiroo Suzuki’s work are even overload.
Suzuki studied “restoration of art works” at the master course of the Tokyo University of the arts. While dealing with old works, he found out his own view of painting: ‘the essence of Japanese art is “humor.”‘ 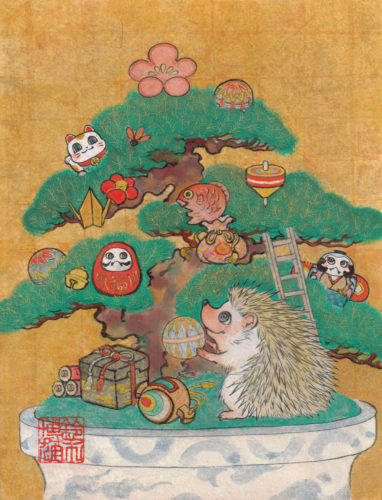 From Choju-giga (“Animal Caricatures”), to Nagasawa Rosetsu, Katsushika Hokusai, or Kawanabe Kyosai, there was “laugh” in Japanese painting, but after the war, they are just only serious. Suzuki wondered there. His works combine the aesthetics of colors and lines of works in before early modern period, and the robustness of objects as paintings, and they are full of loveliness and funniness. In his works that seem to be only “cute” at first glance, however there is a hidden question: “what is the true ‘tradition’?” 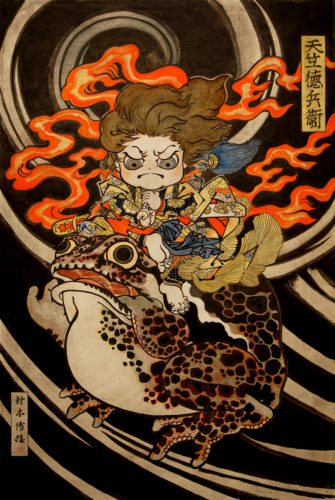 Criticism to painting history has become only to “contemporary art” in recent years. There are not a few artists including Aida Makoto, Murakami Takashi, etc., which have decorated art history and added elements of laughter. However, Suzuki is carefully keeping the appearance of “Japanese painting”, and began to discreetly refer to art history.
When we look his works, first say “Cute!”, and then feel something like reverberation. Today, it is the tradition that is the most new. (Chiaki Tanaka, President of Shukado)