The Encounter with Yasunari Ikenaga by Chiaki Tanaka, president of Gallery Shukado | 2011

It was through a site called All About “Nihonga” (Japanese-style painting) which is no longer updated that I came across Yasunari Ikenaga’s work, or the Yubi-school (Yubi means finger in Japanese), in the feature of promising artists. Shukado gallery has been dealer of antique books and paintings since last generations . We have letters of famous samurai Takeda Shingen, drawings of Takehisa Yumeji who is famous for his portraits of beautiful women , original paintings of Katsushika Hokusai, and even reached out to Chinese antique. You may say that we deal with a little of everything. However, there is a powerful belief that we always adhere to, that is, we look for painters who would risk their lives to create. Indeed, artist, novelist and actors, so-called “performers”, are working to their fullest potential to create something phenomenal without thinking about the possible negative effects to themselves. And you can tell easily from the depth of the outcome. For me, a painting that merely looks good is not what I need, at all. 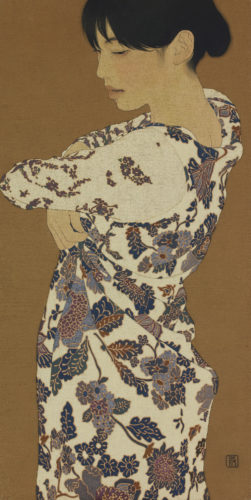 Most of the paintings we see on the internet or in the art journals are absolutely skillful or eye-catching, but a few of them are with the genuine pursuit of the creators. Unfortunately that’s how it works, even in the fields of movies and novels. It is probably one out of 100 can be considered as a masterpiece. The true gem pops out for the sake of all those futile and boring things. The paintings of Ikenaga Yasunari are so rich in originality from his own perspective. Somehow, I thought they might look skillful but not 100 percent. To illustrate, he has tried so hard on lowering the saturation, as well as putting woman’s clothes and the background in a harmony. It looked wonderful as a whole, to me, I felt that there was still something huge that he couldn’t achieve. Anyway, I was lucky to meet him thanks to one of my acquaintances who worked for All About site. Guess what? We were born on almost the same day, his birthday is one day before mine. “That must be fate! We could probably get alone well with,” I thought. In general, Ikenaga Yasunari is a quiet man, but he does talk a lot when he is in the mood. He is intelligent, charming and popular with girls. However, he was painting with all his life. There’s nothing in his well-cleaned room, even mattress and quilts. For him, it is the room for him only to focus on painting. He paints women, rarely but also cats. Apart from that, what else? Probably death. Even so, it is his ordinary life, nothing to do with tragic or solemn. “This time, I met a real painter,” I said to myself. 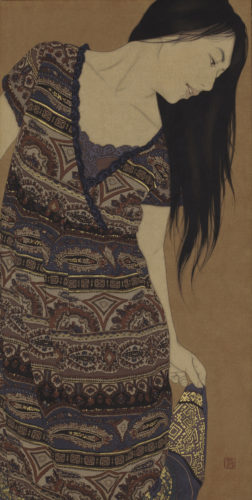 He began to paint after 10-year window and organized the “Yubi-school” exhibition which invited Japanese-style painters who paint mainly human portraits. I found it really interesting. It is no doubt that the core of Japanese art is human portrait. Overall, after World War Two, Painting with thick layers became the mainstream of Japanese-style painting. Plus, human portraits became less popular in the recent years. It seemed that the essence was missing. He thus posed his criticism by holding the exposition. He didn’t really talk about his own works. Although he did write, in a mysterious yet beautiful style, which likewise gave us a little clue. However, we can feel his harsh critique towards other painters through the exhibition which turned out to reflect his elaborate creations. Chiaki Tanaka, president of Gallery Shukado