Japanese-style painter Okamoto Toko will have a solo exhibition in coming October. She also plans to show a large piece in Art Taipei in November. People are getting to pay attention to her amazing works. In the interview, we are going to unveil the figures and the essence of the painting.

Q: The figures in your works are all in kimono, and you wear Kimono too. Is it because you have certain fondness in Japanese objects that you started to paint Japanese-style paintings?

Q: The woman in your new piece “Noon time during spring”which was released in 2012 Tobi Art Fair was also in Kimono. What are you trying to say through this work?

Okamoto: If we take music as an example, composition and lyrics, which comes first? In this piece, it’s the composition. I don’t know if anyone has this experience, when I am home alone, I often turn around even if there’s nothing. I think it has nothing to do with occult power but self consciousness. 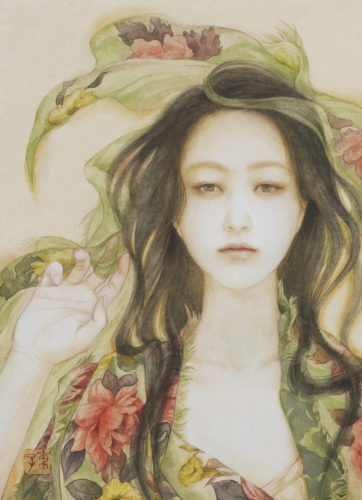 Q: Has the “self-consciousness” become the main idea of your works?

Okamoto: Well, I don’t really want people to capture my self-consciousness either to convey certain sensation through my works. However, I tend to think too much, and be too cautious to move forward, probably because I am too ego-driven. I respect those who have a great suffering from life but never whine about it. Likewise, I appreciate those who just let their emotions go and are able to keep going. I know well that life is not easy and am just merely attracted by the fact that people are trying so hard to live a life even though they all have struggles to some degree.

Q: As you mentioned previously, do you have any work that lyrics come first than composition?

Okamoto: It was not like I decide before I paint, but the works for Art Taipei should be more in the category. Somehow, it is considered to be more “artistic.” I have had some opportunities to be with people who have great adversities since last year. Every time when I talked to them, I felt like all my problems are so small. Not like those works in Tobi Art Fair which are more isolated and dark as an image, the pieces for Art Taipei will be more bold as if you can feel the light/hope.

Q: Do you plan to show some pieces with animal motifs in Tobi Art Fair?

Okamoto: Yes, I have always wanted to draw animals but rarely done it before. This time I will draw two pieces, one with fox and one with black-tail gull, animals that I came across by accident. I was so appealed by their resolute-looking and decided to put them in my paintings one day. 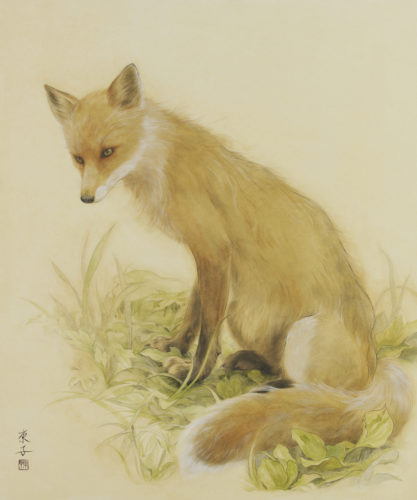 Q: I see. That’s something to look forward to! By the way, we have posted the information about <<Noon time during spring>> as well as the exhibition in Tobi Art Fair and received an overwhelming response.

Okamoto: I am happy and grateful to hear that! But right away I can’t help to think that people will say after seeing them in real life. That’s probably again, too ego-driven. But somehow I don’t know how to react when I am complimented. Normally I was like, “You really mean it?!” That’s why my friends always tell me, “Just accept it and take the pleasure!”

Q: It’s been a while since your last solo exhibition, are you stressed?

Okamoto: Yes, time-issue certainly makes me stressed (smile). Nonetheless, being (rushed) is not a good thing when you paint. I used to put my favorite music on while painting, but since I tended to hear the piece, now I just listen to some radio shows. If it is too quiet, I will start to worry about some other aspects. All I need is some noises. I can be really focused when working on the production, close to a craftsman!

Q: It is important to accomplish a piece, but I think the whole process of production is also precious for you, isn’t it?!

Okamoto: Yes, I like a lot when I am absorbed in painting. I once thought to work on scenic design after college. At the time, I was asked “It is possible for you to stop painting?”. then I came to realized how important it was. Drawing is something that I have done since I was little. I love the fact that some of my intimate sensations can be visualized on the canvas from the tip of my fingers.

Q: Do you have any future goals?

Okamoto: I would love to try anything in order to become a better painter so that I can paint anything on my mind. I probably will do so for the rest of my life